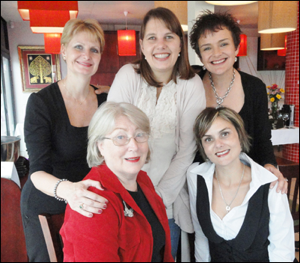 2011 – KZN Women in Business (KZNWIB), the oldest networking group of its kind in the province, this year celebrated its 16th anniversary. From its start as a supportive group of six women in 1995 to the formal, structured networking organisation it is today, KZNWIB has seen growth and change over the years. It has also stayed true to its original premise – that of providing a welcoming, warm and nurturing environment to women in business, from sole proprietors to CEOs of large companies.

Formed as an inclusive group for the “everyday” businesswoman, KZNWIB’s mentoring approach has fostered a number of entrepreneurs over the years. Both Sharon Emmerich (1999 – 2000 president) and Karen Brokensha (2005 – 2007 president) began their businesses (in finance and hospitality marketing respectively) as a direct result of encouragement they received from KZNWIB members. Other women have grown with the organisation and developed personal confidence as a result of their association. One such person is Candice Thurston, the administrator of KZNWIB, and another is Charmaine Schwenn, the current outgoing president, who this year was awarded first place in the legal category of South Africa’s Most Influential Women in Business and Government Awards.

Each president has in turn left her own unique mark on the group and, in her two or three years as leader, infused it with freshness. Belinda Davies (2002 – 2003 president), for instance, brought a professionalism to the group, whilst Alice Leah (2008 – 2009 president) an element of fun. This regularly changing leadership structure is a particular strength of KZNWIB and has contributed to its longevity. Changes instituted since Beverley –Ann Fink, a founding member, helped to “beg, borrow and steal” venues in which to meet include: a fixed time, date and central venue (La Vita Conference Centre) for meetings; the appointment of a chair, vice-chair and a paid administrator; the adoption of a logo (an open beaded necklace signifying room for growth); use of annual themes (e.g. “Women of Substance”); and corporate sponsorship of meetings.

As 2011 draws to a close the incoming president will write the next chapter in the KZNWIB book. She’ll be helped by fellow businesswomen – all of whom will benefit from the reciprocal nature that typifies networking relationships such as those found in KZNWIB. KZNWIB has given me the life I have now. I love this organisation (Sharon Emmerich).